Some of these approaches are life-changing, while some simply don’t work: and it can be confusing and time-consuming to find the best ones.

The Power Of Creative Visualization program solves this challenge by guiding you through a curriculum of highly optimized creative visualization techniques and sessions that are each:

The Power Of Creative Visualization gives you all the best benefits of this transformational practice: with hardly any of the time or hassle you might otherwise need to commit.

Vishen is the Founder of Mindvalley: the world’s largest personal growth company, with over 12 million students worldwide and growing fast. A bestselling international author and speaker, he is regarded as one of the foremost experts in the field of human development. Vishen and his team of 250 education innovators at Mindvalley have created many of the world’s foremost brands, apps, tools, and events in the field of human development: including Mindvalley University, Omvana, A-Fest, Soulvana, and more.

He has led Mindvalley to enter and train Fortune 500 companies, governments, and millions of people around the world. Vishen’s work in personal growth also extends to the public sector, as an activist working to evolve the core systems that influence our lives – including education, work culture, politics, and wellbeing. 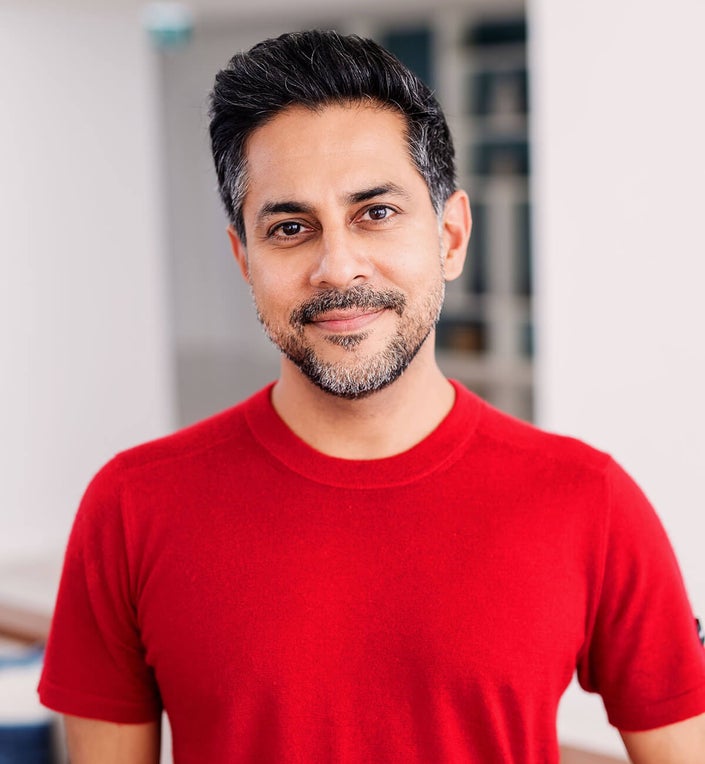 Lisa Nichols is an international bestselling author, speaker, and personal growth coach, who entered mass consciousness with her starring role in the hit film, The Secret.

Lisa is only one of two African American women to take her company, Motivating the Masses, public. Her six bestselling books include the New York Times bestseller, No Matter What.

Lisa is widely regarded as one of the best orators in the world, and her ability to command a stage and move audiences globally has placed her among the very best orators in history – alongside legends like Martin Luther King Jr., John F. Kennedy, Nelson Mandela, and more.

In addition to her numerous media appearances on prime time TV – shows like Oprah, The Today Show, The Steve Harvey Show, and Extra just to name a few – Lisa’s outreach program for teens has touched the lives of 211,650 young men and women, prevented over 3,800 teen suicides, supported 2,500 dropouts in returning to school, and has helped thousands reunite with their families.

In The Power Of Creative Visualization, Lisa employs her oratory gift to take you on some of the most profound, emotional, and vivid creative visualization journeys you’ll ever experience. 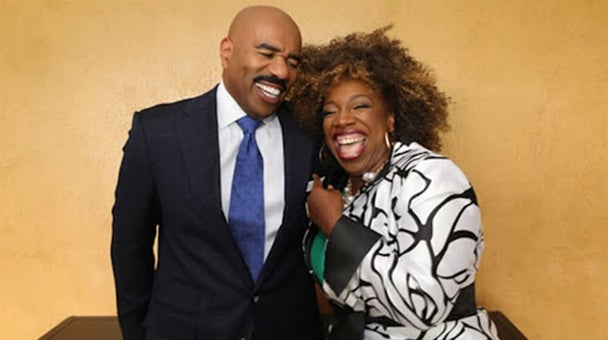 Lisa on The Oprah Winfrey Show

Creative Visualization is a 12-day online program for mastering the power of this transformational practice.

On each of these days, you’ll experience insightful training videos, and immersive Emotion Fueled Visualization sessions for creatively visualizing (and realizing) different goals for every dimension of your life.

From wealth, to healing, to manifesting, to spiritual growth and much more: you’ll get today’s best creative visualization tools for creating any kind of lasting transformation you want – from the inside out.

You’ll emerge from this experience with a lifelong toolkit of creative visualization techniques you can use at any time to awaken the creative force inside you, and make positive changes that stick. 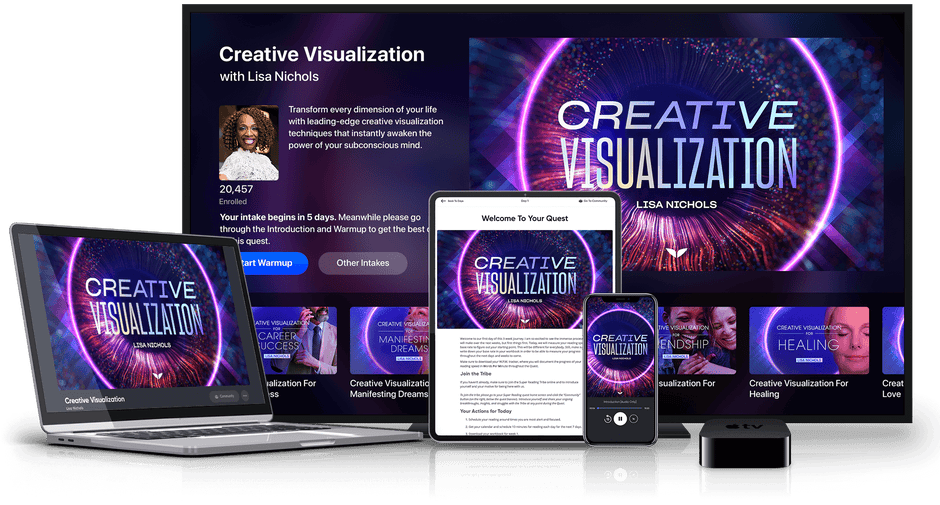 PART 1: Intro Lessons: What is Creative Visualization and How to Apply It

Your journey begins with a three-part video training on the fascinating science behind creative visualization – and the best methods to practice it for the fastest, most rewarding, and most lasting results.

Amplify your meditation practice with this powerful visualization track and begin consistently experiencing the full benefits of your meditation sessions: from deep states of mind to tranquil relaxation. Bring up scenarios from your workplace and your private life, and discover how to easily dissolve moments of stress instantly.

Transform yourself into a powerful being with the ability to create your own luck. Visualize yourself manifesting progressively larger and more ambitious experiences, to the point where wealth and abundance are no longer barriers to your life goals.

Be guided through highly vivid imagery to allow you to tap into your once dormant intuitive potential. Visualize yourself unleashing a profound boost in spiritual connectedness with your surroundings, and discover your higher self and your true purpose in life.

Prepare yourself to be taken on an enriching and enlightening journey toward accepting the absolute beauty of your body. This mesmerizing visualization will help you become what you think about everyday, teach you how to love and embrace yourself, and how to envision an ageless lifestyle.

In this visualization session, learn how to form an unshakeable bond between your mind and your body. Through the sheer power of your mind, you will learn to connect and command your body to kick start your self-healing, boost your immune system and even naturally shed those extra pounds – for good.

Construct crystal clear images of your ideal body to the most minute of detail. From your healthy and clean organs to your energized and toned muscles – all working in perfect synergy to bullet-proof your health, drastically slow down aging and to revitalize your entire body.

Visualize a powerful attraction toward abundance in every aspect of your life: your dream car, the perfect home, your ideal holiday destinations – everything. You will also take it a step further and picture the vast contributions you will make (with the wealth you have created) toward the betterment of humanity and the world.

PART 9: Lesson 8: Creative Visualization for Your Positive Self

Discover true happiness that radiates from your core and spreads to the people around you. Visualize the most positive version of yourself: great character, strong values, balanced emotional control – and, in turn, attract only the people who uplift your happiness further. Discover the power of emotional intelligence, allowing you to handle even the most stressful of situations with ease.

Form clear and vivid images of your business or career booming, and the rewards that brings. Visualize every detail of your ideal job: from completing your projects in record time, to experiencing exponential growth in your workplace. And imagine having the self-motivation that comes from immersing yourself in your true passions every single day.

Create the perfect network of friends and family, those who will be there to support you in your times of need and celebrate with you during your moments of success. Forge your ideal relationships, create lifetime bonds with the people that matter the most to you, and consistently attract the people that can help serve your life’s greater purpose.

Imagine your perfect relationship dominated by the purest and most uplifting emotion: love. Feel the pleasure of unconditional love, both in giving and receiving, and visualize the benefits of a healthy and passionate love life.

Experience the joy and gratitude of being a supportive parent to your children, and a loving son or daughter to your parents. Envision strong, unbreakable bonds within the family dynamic and imagine creating the perfect relationship with both your parents and children: one as easy as it is rewarding.

How to buy with PayPal and download in the store?

How to buy by credit card without having a Paypal account in the store?

Important:  The language of the course is English. All material is downloaded daily from Mindvalley and shared via a Google Drive link, where you can view and / or download the material. Screenshots of the Mindvalley platform are included so you can verify that all material delivered by mindvalley is delivered by us. See product images. Access to the group is not given in this course. See frequently asked questions. Once you have passed through the payment gateway, a download button will be enabled with the file (PDF) with the instructions to access your course in the same store. Also, the same pdf will be sent to your email as a backup once PayPal credits the payment.

All queries can be made to whatsapp chat. Just click the button and go from your mobile.